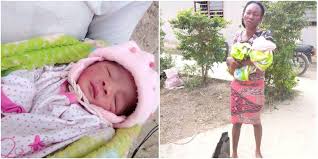 Officers of Ondo Security Network, popularly known as Amotekun have arrested a woman,  identified as Seun Oladayo, aged 22  for allegedly selling her newborn baby for N10,000.

The 22-year-old sold the baby shortly after giving birth to a Pastor, identified as Olawale who reported the incident to Amotekun officers.

Oladayo said that she decided to sell her baby after realizing she could not afford to cater for her as the father had abandoned her since she told him she was pregnant.

The suspect also confessed that she cut the umbilical cord of the baby herself after the delivery with the motive of killing her.

The Pastor who reported the case to Amotekun officers said the woman’s brother identified as Yinka asked him to bring N10, 000 in order to buy the baby as they were not interested in keeping the baby.

The Pastor noted that he suspected that the baby’s birth must have been induced as they were indications that it was not yet time for the delivery.