20 YEAR OLD GIRL CRIES OUT AS FATHER SLEEPS WITH HER, THREATENS TO KILL HER 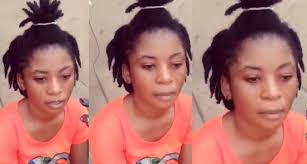 A 20-year-old lady, who identified herself as Fatima Usman, has accused her father of having sexual intercourse with her for a long time.

Fatima, who spoke in a viral video, identified her father as Usman Momoh, saying he works at the Rufus Giwa Polytechnic, Owo, Ondo State.

In the two minutes, 10 seconds viral video, Fatima alleged that her father had been sleeping with her for a very long time and whenever she refused to have sex with him, her father would send her out of the house at the midnight.

Fatima said, “My father has been sleeping with me for a very long, and whenever I tried to say no, he would send me out of the room. If I say I will voice out, he would be threatening to kill me. He would bring out a knife and show me that if I tell anybody, he would kill me.”

Fatima when asked where her mother goes whenever the incestuous act of her father was being committed, she said, “My mother did not bother to check on me whether I slept in the room or not. Anytime my father sent me out, and I slept outside, my mother would have slept off, she did not know what was happening.”

The young girl called on the government to help him get justice.

In another viral video relating to the matter, a man, who claimed to be an in-law to Fatima’s father confirmed the incident and said the family had intervened in the matter.

He said, “When we heard about the matter, he was asked to bring some items as cleansing for the incestuous act and he provided those items, which include tubers of yam, goat, local gin among others. After that, the elders in the village warned the girl not to return to her father’s house, but be staying with me.”

The man further stated that the matter was reported at a police station and later Momoh was arrested and granted bail.

Mr. Tee-Leo Ikoro,   the Ondo State Police Public Relations Officer when reached said he had not been briefed on the matter.