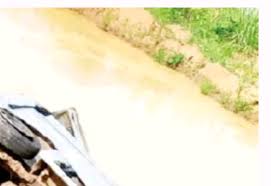 Twenty persons have been killed in different road crashes in Kogi and Osun States.

In Kogi State, 17 persons lost their lives in a crash that occurred on the Irepene Abuja/Lokoja highway.

NEWSNAIJA learned the accident happened around 5 am on Tuesday.

The accident according to the report gathered involved a Toyota Hiace bus and a luxury passenger bus heading for the South-South and the northern part of the country.

NEWSNAIJA further learned that 15 persons died on spot, while other passengers, who sustained varying degrees of injury, were rushed to the hospital which two persons later died.

Solomon Agure, the  Kogi State Sector Commander, Federal Road Safety Corps, confirmed the accident to one of our sources on Tuesday.

The Sector Commander said, “The Toyota Hiace was going down to Auchi, Edo State, and the luxury bus was coming from Okene. The driver of the luxury bus overtook a car and lost control. It was dark, so it hit the smaller Toyota bus and pushed it into the bush. The vehicle somersaulted and 15 persons died on the spot and two later died in the hospital.”

Two passengers, whose identities could not be immediately ascertained, on Tuesday lost their lives in a road crash at Akinlalu on the Gbongan/Ile-Ife Expressway, Ife North Local Government Area of Osun State.

Two other persons were also injured in the crash, which occurred around 3 am.

Details of how the accident occurred were still sketchy as of the time of filing this report.

It was learned that the buses involved in the crash had a head-on collision.

Also, Agnes Ogungbemi, The Sector Public Education Officer, FRSC, Osun State Command, who confirmed the accident in a chat with one of our correspondents, said it occurred before daybreak.

Ogungbemi also said the accident was probably caused by a speed limit violation, which led to the loss of control by the drivers of the vehicles involved.

She noted that remains of the deceased had been deposited in the morgue of the Obafemi Awolowo University Teaching Hospital, Ile-Ife, while the injured passengers were also being treated at the same hospital.

“All the items recovered from the scene were taken to the Ipetumodu Police Station. Some military men also assisted the FRSC personnel in the operation,” Ogungbemi added.

Similarly, a woman, whose identity could not be immediately ascertained, lost her life, while 14 others were injured in a lone accident that occurred at lleki-Ijesa on the Ilesa/Ife Expressway, Osun State, on Tuesday.

A bus conveying the deceased swerved off the road and fell into a nearby lake.

Ogungbemi confirmed the crash and said the probable cause was a speed limit violation, which led to the loss of control.

She added that a woman was pronounced dead in the crash, while 14 other passengers sustained injuries.

“The injured passengers were taken to the Wesley Guild Hospital, Ilesa, for treatment by operatives of the Osun Ambulance Scheme, while the remains of the deceased were deposited in the morgue of the same hospital.”