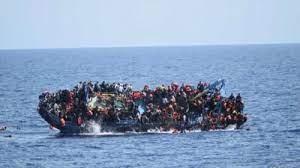 A shipwreck off Tunisia has claimed the lives of 17 African migrants while two Nigerian women were rescued as they tried to move to Italy from Libya by crossing the Mediterranean Sea.

The Tunisian Red Crescent told Reuters on Thursday that two Nigerians were rescued in waters of the southern town of Zarziz by the Tunisian coastguard.

The 19 migrants had boarded the ship on Sunday from Zawyia in Libya.

The names of the rescued women and the rest of the migrants were not mentioned.

NEWSNAIJA learned this is not the first of such events as over 40 migrants drowned off Tunisia’s port of Sfax, South of Tunis last month.

According to the United Nations, the central Mediterranean had claimed the lives of the migrants as they tried to get to Europe by sea.

The United Nations High Commissioner for Refugees stated that up to 633 people have died or gone missing through such sea travels while almost 23,500 people have successfully moved through the sea to Europe.

According to the UNHCR, most of the migrants moved from Tunisia and Algeria to land in Italy and Spain.