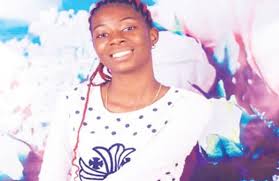 A 14-year-old secondary school pupil, identified as Fathia Ojewoye, has been raped to death at the Agbeloba-Oriyonrin area of Abeokuta, Ogun State.

The 14- year old was on Wednesday been declared missing by her parents, but her corpse was found three days after with some of her personal effects in an uncompleted building in the area.

When our source visited the residence of the deceased’s mother, who had separated from her husband, sympathizers were seen consoling her, she didn’t say anything as she asked to be left alone.

The deceased mother, however, vowed to ensure that the killer of her daughter whom she gave birth to while in secondary school, was brought to justice.

A source in the area said that Fathia was sent on an errand by her mother to refill the gas cylinder around the area, but she did not return home.

she was reported to have been last seen with a young man, while she was going to the gas station.

The young man, who lives around the area, was said to have run away, apparently to avoid arrest.

Newsnaija learned that her corpse was found in an uncompleted building near her grandmother’s residence defiled in a brutal way and later murdered by yet-to-be-identified persons.

Abimbola Oyeyemi, The Police Public Relations Officer in the state, confirmed the incident.

The PPRO  said an investigation into the brutal killing of the teenager had begun.

Oyeyemi gave an assurance that the command would ensure that those behind her death would be apprehended soon.

He said the corpse had been deposited in the morgue of the State Hospital, Sokenu, Abeokuta.

The police spokesman added that arrangement was being made to conduct an autopsy on the corpse.

Meanwhile, the Ogun State Child Protection Network, a coalition of non-governmental and civil society organizations, has condemned the incident, Coordinator, Alfred Soleye in a statement expressed shock over the brutal murder of Fathia.

The network urged the police to carry out detailed investigation and accurate forensics on exhibits recovered from the crime scene to ensure that those responsible were brought to justice.